How the ICE Form I-9 Auditing Process Works 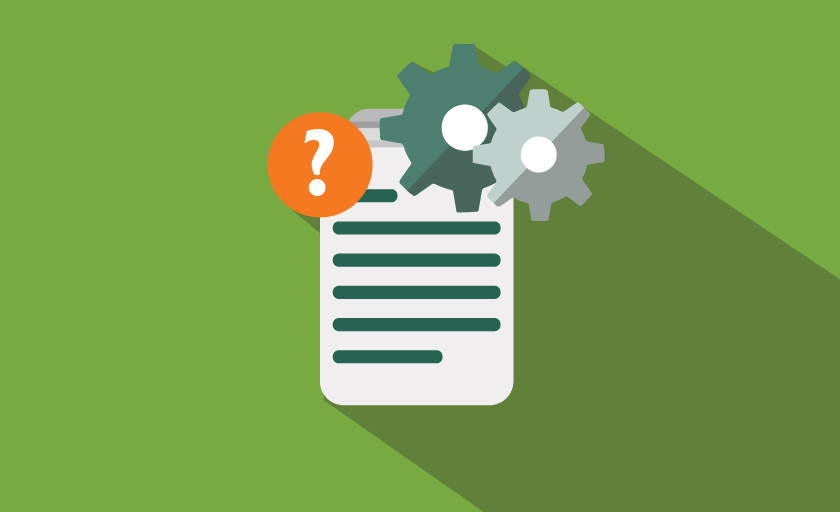 Between the two pages that contain fillable fields, there are over 150 possible mistakes that can be made when filling out the Form I-9. Neglecting to audit Forms I-9 before they are filed away, can lead to unfortunate surprises if Immigration and Customs Enforcement (ICE) ever comes knocking at the door. Should you ever pull the short straw and end up being the subject of an ICE audit, here are some details on what you can expect during the process.

ICE initiates the Form I-9 inspection process with the Notice of Inspection (NOI).  An NOI requires employers to submit original Forms I-9, together with other business documents and information, to ICE. After receiving an NOI, ICE allows three business days to present your organization’s Forms I-9. ICE will also request additional information, such as payroll, a list of current employees, or a current business license.

Warning Notice – Employers will receive a Warning Notice for substantive or uncorrected technical violations, this notice will be given if ICE identifies these violations in your Forms I-9 but doesn’t believe that the violations warrant a monetary penalty. This is normally given when there is an expectation of future compliance by the employer or a “show of good faith.”

Final Order – When an employer that receives an NIF wishes to dispute the fines, they can negotiate a settlement with ICE or request a hearing with the Office of the Chief Administrative Hearing Office within 30 days of the notice. If the employer doesn’t take action within the 30 days, they will then be sent a Final Order. 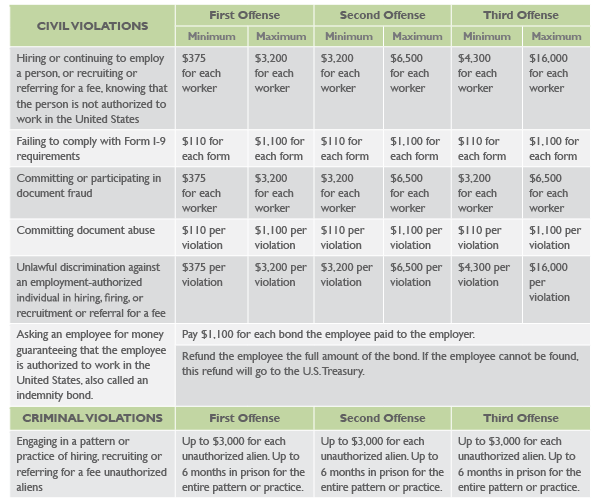 Fines for the different types of violations are determined using this table provided by the US Customs and Immigration Services (USCIS). 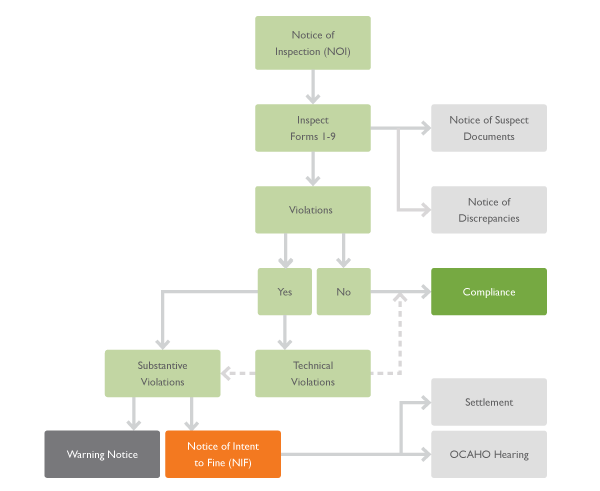 Once ICE establishes the initial fine amounts, the fine will be augmented based on the following table. 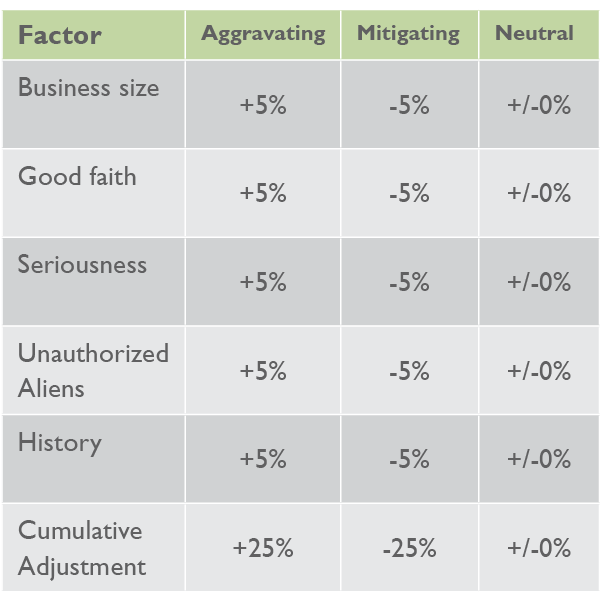 This fine table was just recently modified by the Department of Justice, increasing the fines in most areas of the table.

The Odds of an Audit

What are the odds of getting a Notice of Inspection?

The government has been increasingly proactive in identifying and penalizing Form I-9 violations – notably since the release of the new form in 2008, and the revised version in 2013. In 2011, ICE announced that Form I-9 audits had increased 375% since 2008, according to a statement from former ICE Director John Morton. In 2013, ICE started a new wave of Form I-9 audits – targeting more than 1,000 companies across the US and increasing the amount of overall audits by 1,100%.

Despite ICE increasing its reach by auditing more companies, the overall number of audits per year is still very small. Considering that there are roughly six million companies in the US, the number of audits represents less than .02% of all businesses. While this number continues to increase each year, large and small businesses within several industries are being audited, dispelling any notion that ICE plans to go after specific groups that may allegedly hire more illegal workers.

Internal audits are a great proactive measure to ensure that your organization’s Forms I-9 are in order before an ICE audit. If you decide to start implementing a process for conducting internal audits, you will want to make sure that you establish a thorough, non-discriminatory procedure for doing so. Our internal auditing checklist is a great starting point for creating this procedure. It also contains bullet points for each item you will want to inspect during your audit.